Preheat your oven’s broiler. Prepare the au jus mix according to package directions. Add the sliced roast venison, and simmer until heated through.

Slice the rolls open, and place sliced side up on a baking sheet. Divide the venison between the rolls evenly, placing a portion on each slice of roll. Season with salt, pepper, and garlic powder. Top with a single layer of roasted red peppers, then cover with slices of provolone cheese.

Place under the broiler, about 6 inches from the heat source. Broil until the cheese melts, and the edges of the rolls are lightly toasted. Place roll halves together to make sandwiches.

Pour leftover au jus into small cups for each person. Serve with sandwiches for dipping. 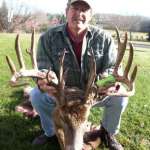