Scents have been used for years that mainly started with home-made concocted brews steeped of pine, acorn, and cedar. Todays modern hunter has a wide array of commercial products right at their fingertips for a relatively low out-of-pocket expense. All these self proclaimed “best on the market” scents are fine and dandy but only when used in the right area.

Take this scenario for what it’s worth. Years back I had been hunting a wide open hardwood ridge which compromised mainly of oak trees that dropped their mast each year like clockwork and attracted deer from a large area. In all reality I am sure the deer had pretty much set their internal clock to coincide with this yearly feast but in all honesty it sounded like an alarm clock. As you sat in your stand it sounded like rain, more like hail, hitting the crisp leaves below on the forests floor. It made for some very difficult situations in hearing a deer approaching at times and, in several situations, put a deer into motion through sheer nervousness. I had always used a home-made acorn scent to cover my own scent to match the area I hunted which never seemed to fail.

On this certain trip I headed to the ridge for an evening hunt but found that a recent windstorm had dropped a tree across the road more than a mile from my stand. With no saw or means to remove the obstruction I needed to find another area for the evening or, not hunt at all. The latter wasnt an option as I had 1000’s of acres open to the public just a short distance away. I opted to hunt the edge of and old fire lane below a maple ridge that I had scouted earlier in the year. I tucked myself against a large downfall of balsam playing the wind and overlooking a heavily worn trail.

It wasnt long before the first deer appeared roughly 20 yards in front of me and stopped with an alerted stance you see when a deer crosses your trail and picks up your scent. Even though this deer was nowhere near my point of travel it had definitely keyed in on something and quickly retreated in the opposite direction without a sound. The deer must have caught my scent but it hadnt alerted her as direct danger but something that seemed out of place. This scenario played out two more times within an hour with one being a small 6 point buck before it became evident as to where the problem originated.

The problem was me! From continued use of acorn scent sprayed on my gear while hunting the oak ridge the deer had picked up this scent as something that just wasnt right. Although the deer never came any closer they surely had no plans to proceed on their intended route as I had anticipated. As Luck would have it the ridge was actually working against me with a fairly strong wind that I had intended to use to my advantage. The majority of my scent was being picked up and carried on the currents up over the ridge but a small depression seemed to scoop my scent to the sides. Once the situation had been revealed I simply rubbed some of the balsam needles between my gloves and also slowly worked a small branch between my feet on the ground from the downfall I had used as a backdrop. Although the evening was drawing to a close, a doe and fawn walked by and browsed directly in front me without detection before this hunt ended.

In the scenario above you see how the right scent plays into the hunt and how a simple tactic of using natural elements can also save a hunt.

Keep in mind that cover scents are simply that. Used to cover your scent. Not attract deer! Use the wrong scent in the wrong place and you can deter as many deer as you might have by not playing the wind and having the deer catch your human scent. When at all possible use scents that compliment your surroundings or simply, use not scent at all if you prefer to remain as scent free as possible. When you find that you may be in the same situation as outlined above make use of the immediate area for a quick cover scent. Dirt or moss pulled or worked with your hands and feet can be easily utilized by those sitting on the ground at any time.

Paying attention to scent control is the first step in a successful hunt but matching the scent to your hunting area can mean the difference between venison in the freezer or another day of watching white flags fading out of sight. 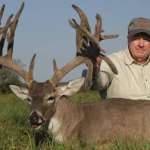