Here we go! Another season of hunting that elusive whitetail deer is in full swing for many hunters. The reports will start to filter in regarding the latest big buck harvested and the inside information will be held in what one might consider a classified manner with nothing but top level viewing for a select chosen few. This is especially true when the hunter has done his or her homework well in advance of the season opener. For these successful hunters it will be a time of admiration and celebration but, for the majority of the hunting population it will become just another year…again.

I spent years hunting whitetails with firearms before graduating to archery equipment. In those earliest of days I learned from my father, who, in my eyes, had more information than I could possibly ever absorb in a lifetime. I was taught the basics of reading deer sign and dedicating myself to time on the stand regardless of the weather or my waning interest at times. Most of that knowledge was embedded deep within my very fabric of existence and still holds vital to success some 28 years later. Yet, there was a flaw in the method, a chink in the armor if you will. We hunted the same area year after year. Practically the same stand from one season to the next. And, although we managed to fill tags and create the substantial bonds of a father and a son, I always wondered what might lay ahead just over that next ridge or in that great expanse of forest where nobody seemed to venture. In short, our hunting was stuck in a rut.

Overcoming obstacles is the greatest hurdle for many hunters. It’s not all about your gear, your clothing, or even your level of experience. There’s a mindset to hunting that successful hunters subscribe to before becoming successful. It’s a willingness to walk beyond the personal borders that most hunters create for themselves. I once remember a good hunting partner of mine comment on an area where we overlooked literally thousands of heavily wooded acres from atop an oak tree bluff. The forest below was thick, dark, and wet in most areas, populated mainly with spruce trees and similar canopy that shrouded the ground from sunlight. In the distance you could see small stands of hardwoods dotted through the landscape. Climbing back up the bluff itself was admittedly tiring and tedious. He said, “I’d like to hunt down there but how the hell would we get the deer back out?” I remarked that transporting the deer out only comes after we shoot the deer so, if you want to sit on this ridge and hope they come to you, feel free. We know the deer are down there and that my friend is where I plan to hunt.

That mindset is the varying degree between many hunters. Some hold a higher work ethic while others will sit tight and hope the game comes to them. As I’ve explained in the opening paragraphs, I’ve been down that path. There are undoubtedly some readers thinking yes, stay with the oak trees and hunt the deer that feed in the early and late hours. For the most part you are correct if the acorn mast is in production. The part that wasn’t explained was that a dirt road paralleled that ridge no less than 25 yards from the oak trees. Although traffic wasn’t heavy this was public property. We had glassed this area earlier in the year noting several small bucks and one exceptional animal using the area as travel corridor to and from their bedding area below the bluff. They fed in an open fire lane but that would obviously change once hunting pressure began and the acorns started dropping. In reference, their bedding area would remain the same unless pushed by hunters. In three years of hunting this plot of property we had only encountered three other hunters who never bothered to venture much further than the bottom of the bluff. It’s relatively secure to say that the expanse beyond was void of hunting pressure, at least until we arrived.

Go Get ‘Em
This is where most hunters fail. Falling onto the wayside of believing you cannot approach deer without alerting them is calling it quits before getting started. If that were the absolute case it would apply in nearly every hunting scenario. Give yourself the credit for finding a great hunting spot and attack with the caution you would in any hunting situation. There is no reference to the actual approach when traversing greater distances on foot to and from your hunting area. Basics of using the wind, immediate cover, and sunlight if applicable, are common requirements for any hunting situation including the approach. Pace yourself at longer distances to alleviate the possibility to breaking a sweat and creating excess human odor. Realize the time needed to travel and plan accordingly. This is especially relevant when approaching the stand. Your retreat “time” is considered negate but your retreat should be handled with the same caution as your approach. Sooner or later you will spook a deer on your travel. It’s just a matter of fact and the odds increase with the distance traveled and the frequency. That doesn’t spell disaster for the hunt or following hunt. In fact, it could hold clues for changes in your strategy.

When you hunt a large tract of seemingly inaccessible land there are some added variables to consider. First and foremost is the obvious lack of competition from other hunters. By and large, deer may not be as prone to vacate an area at the simple crack of a twig. By nature a deer is a curious animal that typically relies on confirmation of sight or smell to accompany sound before the association to danger requirement is met. You “can” move about and search an area cautiously if your initial setup has failed to deliver your own expected results. Keep in mind you are attempting to successfully break away from the proverbial rut that so many hunters get trapped in each year.

As for your hunting try to make your first few visits to your stand as lengthy as possible. It’s no secret that your first hunt on a new stand is basically the most exciting and with due relevance. Each visit deposits more human scent so your first visit is what some consider fairly clean with greater opportunity. Optimizing your time duration on the stand during these first hunts can pay high dividends. With little hunting pressure the deer will tend to move about more freely at all times of the day. During the sequential visits the area will begin to provide growing clues to human activity and alert the deer to the possible threat which could impose a change in their basic routine. Just as in any hunt you should give your stand a “cooling off” period to allow any human scent time to dissipate if you plan to continue hunting. I can honestly say that I’ve never had a single stand that I could hunt every single day with the correct wind so sometimes the “cooling off” period doesn’t come by choice. Rather it is dictated by the weather. Keep in mind that just like any hunting you shouldn’t force your hand when prevailing winds work against you.

Pay attention to the topography of your new location especially during the initial scouting. When you have a vantage point such as the bluff mentioned earlier in this article it behooves yourself not to do some glassing before heading down into the thicket. A forest that is comprised mainly of conifers, or needle bearing trees, will easily showcase your deciduous trees, leaf bearing, in quick fashion through the lens of a spotting scope or binoculars. The deciduous trees hold an inherent value due to their associated landscape. Typically you will find the deciduous variety of trees on portions of land that are higher in elevation. This by itself can lead to a preferred bedding or feeding area which is surrounded by lower outlying elevations. Deer tend to relate well to areas that form a small island of comfort for bedding by keeping themselves out of the damp or wet area when possible. Deciduous trees also tend to bring sunlight to the forest floor allowing for different stages of legumes to sprout which can be a primary food source. And, with a little luck, you may find an area of nut-bearing trees nestled within the confines of the deep forest. A single oak tree dropping it’s bounty of acorns can be like ringing the dinner bell to a whitetail deer. And, speaking of acorns dropping.

My hunting partner and I decided on opposite strategies for hunting that first year. He chose the area just below the oak bluff noting that it was ripe and ready for any buck in the area. He picked a spot below the ridge where the acorns were dropping and rolling down the bluff. This kept him out of sight of traffic and practically on the path where a decent 8 point buck would meet it’s fate. I followed my gut instinct and had a scaffold set over a mile back in the swamp where the spruce and cedars broke into a group of maples and birch trees that stretched for about two acres. It was a perfect bluebird morning when my arrow sliced both lungs on a heavy beamed 10 point buck that folded to the ground before it could run out of sight. We successfully hunted that same area for 2 more years utilizing different portions of the property before it was cut for timber harvest. I admit wholeheartedly that getting the deer back to the truck was a lot of work but the satisfaction was completely rewarding. And, breaking away from that previous rut I was stuck in opened the door to the following years of straying out of the box and walking my own path when it comes to hunting. I’d have to say if you plan to follow anyone’s trail, follow a twisted one. They tend to have more surprises around each corner. 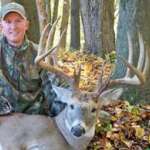