It was early evening when a former hunting partner called with an excited demeanor that I figured would end in those famous words of I got a buck but not this time. As the hype of shooting a large eight point buck slowed to a crawl, it became apparent that he was asking for help tracking the deer.

My usual banter in this situation consists of how far away, how did he react, and have you followed the trail yet, all lead to typical answers. The buck was 80 yards out and it dropped like a stone in a deep dry well but to my surprise it started dragging itself towards the edge of the woods. Joe went on to say that he fired another round that popped the frozen dirt next to the buck which prompted the deer to rise to its hooves and depart on all fours. My bro and I looked for it then gave up and thats when I called you were the words that rang through the telephone. I said I would be there in 30 minutes providing he had secured permissions from the next landowner to retrieve the buck if needed. No problem.

From the beginning I was ribbing him about shooting the deer in the butt and that wasnt going over too well but, being good friends, he understood that if the tables were turned I would be on the receiving end. Its not to denegrate one another. Its more to alleviate the tension for the time being and I really had no way of knowing just how true those words would come to be in a few hours. Besides, to his credit and capability he is a damn good shot. At least in previous instances.

We started tracking from the scene of the shot. Enough snow on the ground made finding blood an easy chore, although the blood was limited, it still didnt require a trained eyeball to hold the trail. The blood itself bore the signs of a muscle shot and I once again posed the question if he had shot the deer in the butt. A resounding scowl was returned rather than any verbiage but for a moment I swore there was a question mark hanging over his head.

Onward we trekked another 200 yards before entering a long-forgotten cedar swamp that literally was haunted by deer. I say this with no better description as everywhere we walked a deer or three would suddenly appear and disappear right before our eyes. Visibility in this swamp is at times next to nothing. At a good moment you might see 30 yards in a single direction. The deer in this swamp are never hunted and obviously could elude a hunter at their will. Strangely enough the deer did not appear to be panicked at all and, as we followed the trail, we wondered if the buck we were following could indeed be one of the ghostly figures. Surreal as it seemed nightfall was closing in quickly so we decided to mark our last blood and head back to base for more provisions, a quick bite to eat, and drop off the guns.

Returning an hour and a half later we resumed where we had left off and the blood trail quickly faded. All in all we had traveled a distance close to 400 yards. The buck had not bedded once and the blood had run its course to an absolute end. In short it now became a body search for which I figured we would never find another sign.

We both headed out on a trail that split where the final blood was marked. The area was littered with tracks and we focused on checking the thickest portions of just off the main trail for our primary search. Nothing turned up and we began to widen our search which, to be honest, felt to me like we were chasing a deer that in actuality was no worse for the wear if in fact it had been shot where I speculated. Several minutes later I hear Joe call out to come have a look. At the western edge of this brush-choked cedar growth was a small nearly tunnel-like entrance where it was obvious a deer had dragged itself under the brush. Even more astonishing was that fact there were traces of blood. This entire area of saplings and stunted cedars may have been 20 foot square in size. We had walked past it numerous times in our previous search and wondered if we had missed this obvious sign or, if the deer had actually continued to skirt our efforts feeling secure in the area. That question was soon answered when we noticed that the deers tracks and blood were undoubtebly imprinted within our own tracks.

As we looked at one another we realized that to invesitgate further we needed to belly crawl in order to gain entrance. Like two snakes sliding through the snow we slid under the lower branches of brush into a small opening where we could stand. With Joe in the forefront he shined the flashlight through the thick entanglement and there lay the buck. Maybe I should say there rested the buck. Down like a bedded deer in a pasture it lay motionless 8 feet away staring back with nowhere to retreat but the way we just came through and as fate would have it, we were blocking the trail.

We stood there talking aloud for what seemed like minutes and the deer never flinched. Its head seemed propped up in some of the thicker branches and you could clearly see the deer had been shot in the butt. I mean clearly enough that you could watch a trickle of blood run down its haunch and drop on the snow. For what would have seemed like a strip right out of a comic book, we pondered our next move.

Joe commented that I should climb a tree and keep an eye on the deer while he ran all the way back and got a gun. I said no. Be a man. That thing hasnt moved a millimeter for minutes now. It must have died like that! Just in case get your knife out and finish it off. As Joe removed his knife from the sheath he stepped in front of my flashlight which casted a shadow on the deer. At that moment the small confined quarters erupted with a healthy deer that wanted nothing more than to escape. Where or how it found the room is still beyond us but that buck tore a whole through that brush wide enough for us to walk out on in an upright position. The last we saw of the deer was that familiar white rump as it bounded off like a coal train chock full of new fuel.

We stood there for a moment in silence before looking at each other and nearly in unison saying Nobody will believe this. All I had to say was youre right. And I cant believe you shot that buck in the butt!

Looking back I am truly amazed how that deer was able to avoid us so perfectly in such close proximity. Why he never simply moved out of the area while we tromped around is a mystery but obviously he felt safe. Hard to say what a buck thats in full rut and has just been shot is thinking but I believe I can be sure to say that he was bit confused if nothing else. 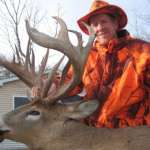