Deer researchers know just how elusive whitetails can be. A radio-tagged Wisconsin buck, for instance, was forced out of his home range by opening-day hunters, but returned the next day and spent the remaining 8 days of the season in a wooded ravine. Despite heavy hunting pressure (about 30 hunters per square mile), only a few hunters even saw the deer and they were unable to bag him.

Whitetails routinely evade hunters in much the same manner, and in most cases, hunters assume there are no deer in the area.

Although some outdoor writers have written in very precise terms on what deer can smell, see and hear, there is no scientific basis for such information. Most of what we know about whitetail senses comes from observing the animal and trying to interpret its behavior. The following discussion represents the thinking of prominent deer biologists.

SMELL. Few animals have a better sense of smell than the whitetail. They can detect odors much better and from considerably longer distances than humans. A large portion of the whitetail’s brain is devoted to odor reception and interpretation, and its nasal chamber can concentrate odors so they’re more identifiable.

Weather conditions affect how well deer detect scents. Steady breezes carry odors long distances, especially in flat, open country. Gusty winds disperse odors, making it hard for deer to locate the source. Dead calm conditions limit the distance at which they can detect intruders. Warming and cooling air can move scents toward or away from deer. In the morning, warming air carries scent uphill; in the evening, cooling air carries it downhill. Humid conditions, including a light drizzle, greatly improve a deer’s ability to smell, but heavy rain “washes” odors from the air.

Dense vegetation and rugged terrain stymie a whitetail’s sense of smell. And it’s usually harder for deer to detect the odor of a hunter above the ground than one at ground level.

VISION. Whitetails have much better dim-light vision than humans. A human’s retina is dominated by cones (color receptors); a deer’s, rods (light receptors). Rods are about 1,000 times more sensitive to light than cones. A deer’s retina also has a layer of reflective pigment, called the tapetum. If light passes through the retina without activating the rods, the tapetum bounces it back for a second chance. In addition, the pupil of a deer opens much wider than that of a human, gathering about nine times more light.

These adaptations result not only in better vision in dim light or darkness, but also in better peripheral vision and motion detection. The whitetails’ habit of standing still when alarmed also helps them detect motion. But deer don’t see as clearly as humans, especially at long distances. They’re usually unable to identify a motionless hunter.

Although whitetails have some cones in their retina, their ability to see a broad spectrum of colors has never been proven. One study, however, determined that deer can
distinguish a fluorescent color from the same nonfluorescent color.

HEARING. A deer’s large, cupped external ears gather and, in effect, amplify sound. The ears rotate to detect sounds from any direction. The slight difference in time it takes the sound to reach each ear enables the animal to pinpoint the source.

Short, loud sounds such as gunshots, however, are difficult for whitetails to locate. It’s not unusual for a deer to move in the direction of a hunter after a single missed shot.

Deer can hear sounds in about the same frequency range as humans. Hills, heavy cover and rain interfere with a deer’s hearing. 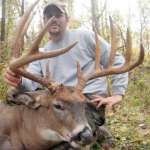