If timing and location truly are everything, then location needs some greater attention in the late summer to early fall when it comes to stand placement. Legwork done today can pay huge dividends in the fall through preparation and anticipation based on tactics and a little science. Highlighting and discussing a few of the top elements to successful stand placement; profile, pressure and natural boundaries seems a really valuable way to analyze if our current tactics are paying off or if a strategy tune-up may be in order. Open-mindedness to any new approach when it comes to wildlife is a really good way to keep an exploratory mindset and to find those quarks that your particular herd may have and could yield a better return on your time investment this fall.

Developing a tract profile:
Much the way we would develop a profile of a particular tract of land to analyze and launch a habitat improvement project; the same information could be used to determine strategic stand locations as well. It is entirely safe to assume that within every “tract” as often referred, there is a basic set of necessities for deer or they would not occupy it. Realize quickly that the tract with which you are dealing may not be defined by deer the same way you have defined it in terms of boundaries. While you may see it in terms of ownership boundaries, to the deer your tract boundary may overlap with an adjoining landowner or other form of property owner entity. Understanding how the deer see the boundaries of their home range and the breakdown of the territories is the more important piece of the puzzle. While adaptable, deer do expand to the greatest available and adequate boundaries and compete within that niche. Developing strong yet small coalitions with other landowners will yield maximum benefit from your collective management plan.

Ample food, water and cover 24/7/365 are elements group number one and their existence in an area does not constitute the ability to have a sustainable population alone, just the ability for an animal to survive there for a period of time. It takes more than these basic requirements to sustain a population. There also needs to be ample areas for birthing, breeding, raising young, thermal cover and escape routes to combat predators. When you consider that the existence of deer in an area verifies that the requirements of element one are minimally met, the secondary items are the areas to weigh much heavier when in tactical pursuit. They are the elements that will determine herd size and health, the ability to hold the animals in the area as well as target harvest numbers for population control and QDM projects. These are all areas of improvement in a good management plan that is developed and nurtured over time. Understanding them simply helps in the selection process for stand placement, but you are not required to become a subject matter expert, just to choose a stand.

After analyzing the tract and understanding the boundaries, sustenance requirement availability and usage potential, stand placement strategies can begin to be formulated. Multiple sites can be identified, but should be kept to a minimum as to not train the animals to the activity of stand development or enhancement. In a small niche area stand placement activity can be as impactful as the introduction of a subdivision to a rural lot. So balancing the need to be mobile and reactive against intrusion and stress becomes a double edged sword.

With the high mobility of modern deer stands on the market, site location can indeed be very fluid to accommodate changes in patterns. Since a clear understanding of the tract profile is gained the information can be used to determine the best stand location for seeing animals at whatever time of the year you need. Scouting frequently can provide knowing, for example, that breeding and birthing activity often happen in the same location and could unlock new information about where to position a stand during the rut based on springtime birthing observations. A simple non-intrusive activity that did not disrupt rutting activity can now pay off with good anticipation that animals can be found in that area in the fall.

Predator pressure:
Not just coyotes, wolves, bobcats, lions and whatever else your special tract may hold, but people-predator pressure is another consideration. How much access do others have to the tract? Are they on your management plan team? What is their typical ingress and egress to the area? How do they react when there is slow action? All things to have an absolute understanding of if you want to have success in a pressured tract. Utilizing the pressure of the human predator is a huge consideration in making stand placement decisions. Knowing the skill and limitations of other hunters in the woods can allow you to let their activity drive your success. Being on the opposite end of an area that sees the most of the human activity can provide brief moments of success as animals retreat the intrusion. Not a great situation to have as a primary game plan, but if faced with a lot of uncontrolled human intrusion there may be no better option.

Have you ever noticed that in some areas when scouting, when you jump or push deer from the area that they seem to leave the area entirely? To the contrary though, in other areas they seem to circle back on you, appear to tolerate more encounters, or keep appearing ahead of you as though you are forcing them away? This observation could be quite important and used tactically when you realize what may actually be happening in that particular area at the time. You could have stumbled upon a bedding or some other day use area near a valuable source of sustenance to them. Placing a stand in the center of that type of an area would likely be very intrusive and could dramatically change the animal’s aspect use causing them to abandon it. Keeping to the fringe of the area and relying on incidental pressure from predators and humans as they move through it will work very well and may provide more than the fleeting glimpse you would get by going it alone.

Finding drainages or thickets that are within close proximity of this type of area may provide you the escape routes that deer use in their retreat or circling-back process, and make a fine ambush point to consider. A well placed stand that can clearly observe escape routes without being in the middle of them will yield excellent action on clever reactive animals. One point to keep in mind is that a setup like this will likely require you to be much more alert due to the reduced visibility and well prepared for close quarters shooting. This would not be the type of area to consider making shooting lanes which would change the escape route aspect.

Observe natural obstacles or if early enough in the year, create some. Those areas that require attention when maneuvering over, under or around things removes some of the heightened sensitivity that the animal naturally has. During the brief moment that the deer has focused its attention to navigating the obstacle, the lack of sensitivity can provide precious seconds for shot placement or cover sloppy non-natural sounds like the draw of a bow string or the click of a safety. Avoid setting up too close to the obstacle because the animal will already have a certain disdain for it, and if not heavily pressured will be naturally cautious. If it senses anything out of the ordinary, and if time permits, it will likely find a way to skirt the obstacle. Deer will already have learned that predators use these same obstacle sites for ambush and will be on elevated alert when not in full flight from danger.

Scout for predators in your area whenever possible. When you encounter predators incidentally do not dismiss it as a random encounter, instead realize that you may be hunting the same tract that an animal with much greater speed, alacrity and understanding of the area is hunting. Routine encounters with predators are more often a signal that you are doing the right things and should be sought out as a strategy.

Natural boundaries and restricting geography:
When a natural boundary inside of a tract isolates certain areas from others there exists incredible opportunity. A great example of a natural boundary would be the existence of a sheer wall that animals cannot or will not readily climb, separating parts of your tract. Make no mistake that they are fully aware that these types of obstacles exist and have determined a buffer or boundary when approaching that they will not cross. They realize that crossing that invisible line places them in a dead end and can force flight into fight, something deer especially are not well equipped to do. So they find a point of no return that they will not cross, turn, and parallel the obstacle until it can be passed. This is usually evidenced by a path used to go around or away from the boundary. When animals are forced to use their escape routes and a natural boundary exists, you can bet that being along that escape path will be a great place to find action.

The other ideal aspect to have is a natural bottleneck of cover that separates two desirable areas. I am referring to an hourglass topography with the areas on either side of the center being physical barriers or perhaps fields that the animal understands will put them at risk and in the open. When not pushed or only slightly stressed deer will keep to the cover aspect (center of the hourglass) and pass through the bottleneck. When pressured and on high alert all bets are off for the use of the bottleneck. Seek out and utilize these opportunity locations by either being inside of the bottleneck or where a clear view of it is possible. Pressured deer will indeed take to an open field, run through water or try to climb a slight barrier to get from one area to the other, so realize that these animals will be on the move. This is again a setup requiring the hunter to be constantly alert at all times to realize success.

Scouting your stand location much earlier in the year will lend itself to uncovering these areas. When the hunting season is upon you the time for calculating a strategy has become much too difficult and becomes guess work at best. Early scouting lends itself to a much greater understanding of how the land is used in other seasons. Commonsense tactics like the ones mentioned in this article can make the difference between experiencing calculated success or just plain luck. Having ample land to work with, adjoining owner cooperation and a very good understanding of how the area is used is a great situation to have, but when those controls are not your own, you must work harder to understand the animals that exist and find every angle at your disposal to combat the situation. Getting out in the middle of it all when mistakes are not as critical and making a stand placement plan will be an obvious key to success. 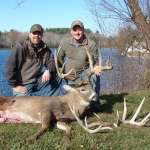