Jamie Farr of Junction City scores big on his buck that could rank in the top 10 of all time for typical bucks shot with archery gear in the state of Kansas.

On October 22nd Farr watched as the buck approached and could tell he was a big whitetail but was yet unsure just how big the brute was. It didn’t take long after he viewed the long antler tines that this was the whitetail buck that he was after.

The hunt started out with the disastrous beginnings that many hunters encounter by scaring deer on the way to the stand that made quite a racket during their departure. As fate would have it Farr didn’t lose his own determintation to make the best of the hunt and continued on as even more commotion took place in the form of turkeys heading to roost nearby.

Farr was nearly to the breaking point debating whether to continue the hunt or not when he caught movement to his left in a stand of oak trees. Shortly after came the first glimpse of antlers that would suddenly grab his attention and spark the hunter’s enthusiasm to a higher level.

The big buck continued on it’s path and soon found itself positioned 30 yards from Farr who placed an arrow through the boilermaker while the big buck fed on acorns. A short 45 yard run from the buck was the grand finale and a new record was in the making.

Farr’s buck had 13 scoreable points with an unofficial gross score of 208 inches. The buck is expected to net around 188 after the mandatory drying period. 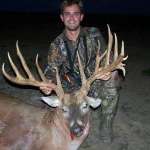