The Mississippi 2008 archery season will be noted as a record year for true trophy whitetail bucks. With several reports coming from the state we find Michael Burkley at the top of the list creating quite a buzz with this fantastic whitetail monster.

Michael Burkley of Natchez bagged this trophy whitetail in Jefferson County sported 15 points with a 25 inch inside spread. Early indications lead to a gross score of 193 2/8. The bucks ranks in the top five for both typical and non-typical for archery in the state.

Burkley will have the make the decision as to whether the buck is entered as typical or non typical for the Pope and Young record books. Although the deer will not be a state record it is expected to rank in the top 5 for Mississippi. 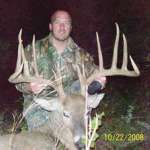