I grew up in an area where baiting deer wasn’t a question. It was a simple matter of fact that everyone you knew who hunted deer also set out a pile of bait, or food, to attract the deer. Some deer hunters claimed that the food made the deer stop long enough for them to get an accurate lethal shot. Others claimed that the food attracted the doe which in turn attracted the buck during the rutting period and, since the bucks were really only interested in the doe, the hunter wasn’t actually baiting a buck. It seemed that everyone had a reason for “baiting the deer” as it was called and some hunters went to extreme measures of dumping entire truckloads of cabbages, pumpkins, corn, and beets in the field to attract and hold the deer. The hunter dumping a truckload of bait on the ground had to because his neighbor dumped a half truckload and all the deer went over there. I guess you see the picture and escalation but, it doesn’t stop there.

Yet another group of hunters would argue the point that the landowner who planted a food plot for the deer also has baited the animals in for the shot. Does it make a difference because he planted clover? Had he planted corn or squash specifically for the deer in the same spot would he or she be labeled as baiting the deer but the fact that legumes of some sort were planted instead draws the label of being a provider for the deer as well as a wise steward of the land. Is this really the case?

Does it matter what you plant in the ground if the intention of the food substance is to attract and hold deer for the purpose of harvesting one of these animals? 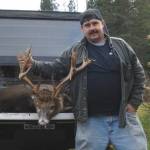