What would you think if your home suddenly erupted with the sound of breaking glass that seemed to never end? A burglar? An accident? Or, perhaps, a whitetail deer that has decided that your clean bay window was a portal to another dimension? Not much suspense in this one since our stories are about deer hunting. But for David and Cheri Ellis in Tennessee, the danger became all too real when a whitetail deer entered their home via the un-opened window.

As Cheri headed for the bathroom and slammed the door behind her the deer made it’s way to the dining room where David took over. With his gun!

Pointing to a hole in the wall David explained that was where his first shot hit. Clearly missing the critter. David kept firing at the deer as the 911 dispatcher attempted to calm the situation and get the man to quit shooting at the deer in the house. As fate and perecntages would have it David finally connected as the deer ran from one room to another.

According to police reports the home looked as though a massacre had taken place leaving the Ellis family with many hours of cleanup. It was not mentioned in the reports whether or not they got to keep the deer or even wanted it for that matter.

Cheri Ellis was quoted as saying she didn’t want any memories of that poor little fellow. 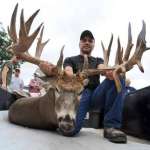