When we say this case is ‘heading’ to the grand jury we mean that literally.

Wrapped in a plastic garbage bag is the head of one of the largest whitetail deer ever killed in Tennessee. Scoring at a whopping 204 points on the Boone & Crockett scoring system this monster had all the potential to create a new state record if taken legally. As the numbers stood during the time of the poaching the buck scored ninth in the state.

Legally is where the line begins in this case as Ricky Williams of Mason, Tennessee, who is charged with hunting over bait, without a hunting license, while possessing an illegal firearm during the deer archery season, could not reach a plead agreement. Now the spotlight turns toward the next phase of bumping the case up to the grand jury.

Williams attorney attempted to create a plea bargain by dismissing the charge of hunting without a license. This would have brought a $1,000 fine for restitution, a loss of hunting privileges for two years, and the forfeiture of his firearm and other hunting accessories to the state. While the attorney argued that this plea agreement would be fair, the judge, Michael Whitaker, was not convinced. Whitaker would not accept the plea without the attachment of a five year loss of hunting privileges stating that hunting over a baited field is one of the most offensive violations a hunter can commit.

The deer head, which was transported into the courtroom by several conservation officers, made quite an impression. Even statements from the officers played a role in a decision that whatever the outcome it was a shame that a deer like this had to be killed illegally. For a 3 1/2 year old deer to be sporting a set of antlers this size leaves a lot to the imagination of what would have been in a couple more years when the deer matured. 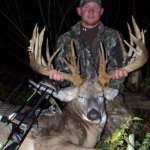