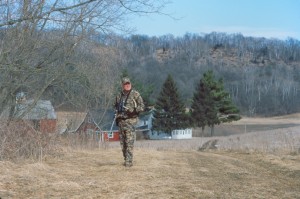 Decades ago I was a young hunter chasing grouse and rabbits with a single-shot .410 guage shotgun and did pretty well. My brother, dad, and I, covered a lot of ground running from one place to the next in pursuit of small game. By running I mean we drove frome one hunting spot to the next, and the next, and, you get the picture. It seemed normal and fortunately for us, while our family couldn’t afford our own hunting camp or chunk of land, we had the privelage to enjoy thousands of acres of state land open to public hunting. And enjoy we did. Small game hunting evolved into big game hunting for me and that’s where I realized that the lack of competition during the small game season didn’t carry over into deer season. Especially the firearm season.

With an area that closes school for the first day of firearm deer season you can imagine the hunter participation and competition. And that participation doesn’t end locally. Our state is flooded with non-resident hunters which is great for businesses and building state revenue but it turns that very same public hunting land into a circus at times. Just finding a hunting spot can seem impossible. Shooting any deer is an accomplishment and tagging a buck made you’re hunting spot as sought after as a winning lottery ticket. And while I hate to make this sound like a pep talk, generally speaking the energy you put into a hunt of this nature will affect the outcome greatly. Let’s look at some statistics for reference and reason.

Hunters that are not familar with the terrain are much less likely to stray very far from their vehicle or a well defined trail, road, or landmark.

Many of these same hunters venture to their hunting spot later in the morning and often leave their hunting stand earlier. Whether that’s due to the fact that their not familar with the land or other reasons is a mute point. The fact that they stick reasonably close to their access points and move at prime hunting times means their actions can affect those hunting nearby. That’s important because if you follow the herd of hunters, you’re less likely to be hunting the local herd of deer.

On the surface it seems conveniently simple that the key to success in hunting public land effectively is to avoid the crowds. I agree. In fact I agree with that statement the majority of time regardless of where you hunt. But when droves of hunters are pushing deer and educating the local herd, the deer will adapt. And that’s where you may be able to use the movement and influx of these hunters to your advantage.

Creating a buffer zone between yourself and the other hunters means more work for you but it also means that another hunter shouldn’t be ruining your hunt. Most of all the buffer zone is where the deer will begin to associate a temporary safe zone. In essence you’re letting the other hunters push the deer in your direction not by luck, but by design.

The dictation of creating a buffer zone doesn’t always resolve to a distance. I wouldn’t say you need to hunt 160 acres away from the closest road because the terrain can severely affect foot travel.

I can look back at a huge oak bluff where numerous hunters sat at the top and hoped a deer would reach them before the sun faded. They dared not hunt below the bluff because you needed assistance, preferably motorized, to retrieve a deer from the foot of the bluff. But that’s where the deer were. It was a rare instance when a deer would venture to the top of the bluff during legal hunting hours. An even more rare instance that a hunter would venture down into the hundreds of acres of swamp below. Our running joke was that many of the oaks were quite near the edge of the bluff. Numerous acorns rolled down the hillside and kept the deer happy until darkness arrived.

So here we’ve put a lot of ground between us and the other hunters due to a natural barrier merely 10 feet from where we parked the truck. Had we no regards for our own safety we could have setup shop right below the bluff where a deeply rutted deer trail wore heavy into the earth. So consider the terrain when making your decision. A large bluff or a wide swamp is often crippling to a novice deer hunter and always puts the stop to those who won’t go that extra mile.

Most times you’ll find that the first weekend hunters will quickly disappear. Some have connected with their deer but most will have tired of staring and hoping that a deer will wander past their blind. Back in the day of hunting with my dad we always saw bigger bucks the second week of the firearm deer season. The woods were nearly again quiet except for a few road hunters who were really just more of an inconvenience than competition. In that respect don’t give up a certain area for the full season just because someone parked their butt there during the opener.

Another technique is to hunt the odd hours. Better yet would be to sit on stand all day but in truth I could never do it myself. I am terrible at sitting still in one spot for more than 3 hours – tops. I find that a couple hours in the morning and then back out just before noon for a couple hours then back for the evening works best for me. It’s that time around lunch that is surprising. Actually it’s very quiet as most hunters are having lunch or changing their location. With the sun high in the sky everything looks different and sometimes that little change of pace is refreshing.

I’ve seen many deer during this time, a majority of them on the move, but have never taken a big buck during this time. I’ve seen them but they were as mentioned, on the move. Looking like a teenager who is sneaking back in the house before anyone notices they were out all night. In reality, most likely on the trail of a hot doe.

The weather can also be your friend. And your enemy. But you can use it to your advantage by getting off the main roads. Snow and excess rain can detour a vehicle from traveling too far from the beaten path. Quickly, six inches of new snow can push a lot of hunters out of an area. A bit of mud and a rutted road are red flags for low-clearance vehicles such as cars. If you still have access to these areas you will find your competition has been reduced, sometimes dramatically. Often these are the areas you can keep in your back pocket waiting for inclement weather to turn the odds in your favor.

It truly comes down to getting back what you put into each deer hunt. Hunting public lands can be difficult especially when the properties are limited. But taking some of these techniques and ideas into consideration should put you ahead of the next hunter. Remember that knowledge in the deer woods is part of being efficient and having a small edge on your competition can pay huge benefits in the end. 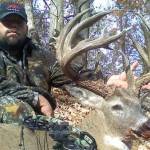